As we continue to reflect on the great national tragedy of 9-11-01, let us rededicate ourselves to keeping alive the tradition of courage, compassion, values and love for mankind that is the hallmark of the fire service and so well demonstrated by our brothers who made the supreme sacrifice at the World Trade Center. They set a standard of professionalism, dedication and devotion that should serve as a constant reminder to give 100 percent every day we come to work.

Our thoughts and prayers are with all the friends and families of firefighters left behind. As many of you know, Fire Nuggets’ author, Lt. Andrew A. Fredericks, was murdered on 9-11. Andy was not only a gifted writer, he was our personal friend. There is not a day that goes by that we do not think of Andy. Our hearts ache for his wife Michelle, son Andrew Jr., daughter Hayley and all of Andy’s family. Since Andy was part of our family too, and so proud to be a huge fan of Fire Nuggets, we have decided to dedicate the entire website to Lt. Andrew A. Fredericks.

This page will grow with personal messages, photos and dedication articles for Andy. Thank you in advance for continuing to support this website not just for the memory of Andy, but more importantly, all of our fallen firefighters, past and unfortunately, the future fallen heroes as well.

The unspeakable tragedy in New York City on Sept. 11, 2001, represents a colossal loss for all Americans, but it has special meaning for us in the Fire Service as so many of our brothers and sisters lost their lives in the rubble of the World Trade Center.

The fallen brothers include Fire Nuggets’ own writer Andrew A. Fredericks. 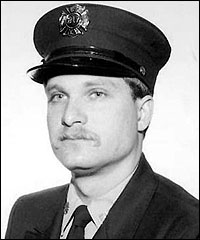 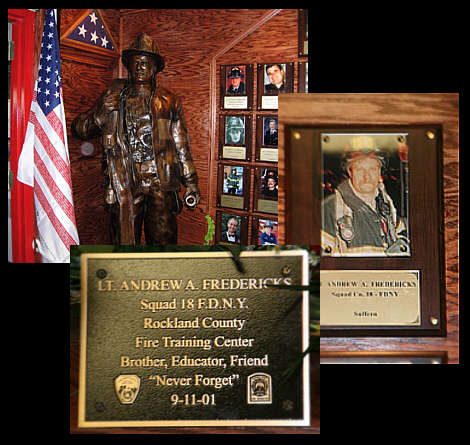 Andy Fredericks Statue Dedication Ceremony
On May 12, 2007, firefighters, family and friends from all over the country gathered at the Rockland County Fire Training Center (New York) to honor Rockland County’s members of FDNY and NYPD who made the supreme sacrifice while rescuing civilians at the World Trade Center on 9/11/01. It was also the occasion to dedicate the long awaited bronze statue of Lt. Andy Fredericks, FDNY.

Our friendship with Andy grew from our mutual involvement with the Fire Department Instructors Conference-Sacramento and the FDIC Advisory Committee. As a result of that friendship, Andy began writing for Fire Nuggets and was a major contributor to the bi-monthly articles.

Upon Andy’s tragic death, we, along with many, felt helpless. However, in a very short time our calling became clear, to dedicate our web site to Andy and start an annual Memorial Golf Tournament in honor of our brilliant author, firefighter, and friend. The golf tournament has grown every year with only forty attending the first event. Today we host about two hundred people representing fire departments from all over the country. Initial proceeds of the tournaments have gone to the creation and dedication of the statue. All future proceeds will go to provide scholarships in Andy’s name for students attending fire programs.

Because Andy was very dedicated to the Rockland County Fire Training Center and contributed to the success of many, brother Mark Wesseldine, FDNY (retired), recommended the statue be placed there. The generosity, support and efforts of many have made this statue possible; and we thank you all from the bottom of our hearts. Additionally, we thank our sculptor, firefighter Joe Cipri of the Denver Fire Department, for his beautiful creation and making this idea become a reality.